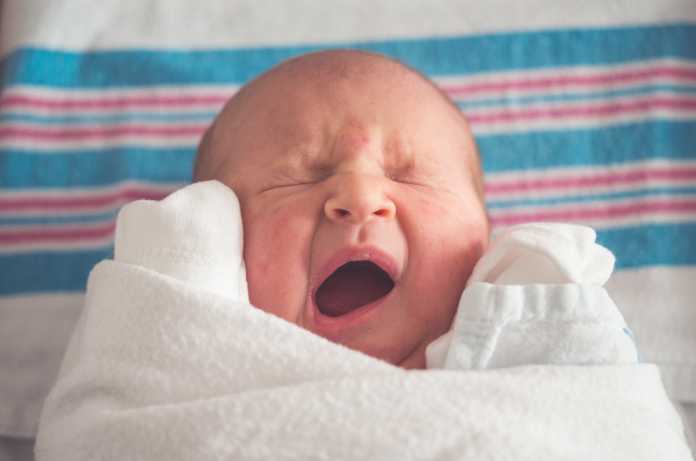 If your baby’s cheeks suddenly become inflamed and look rosy red in appearance, chances are you’ll feel slightly anxious as to the cause of it.

Like most adults, babies will experience redness in their cheeks at certain times, especially during their early months. Though it doesn’t always look a pleasant sight, for many a baby, red cheeks can be easily explained.

Once you know what’s causing your baby’s rosy cheeks, you can work at reducing it or eliminating it.

What is The Most Common Reason Why Your Baby Has Rosy Cheeks?

Firstly, nearly all babies will experience a rosiness in their cheek color when they begin teething. This painful process of waiting for the first tooth buds to come through often causes irritated gums. As a result, you may find your baby’s cheeks feel warm to the touch during this time, as well as looking a rosy-red color in appearance.

Though this may seem alarming for parents, mainly when it causes distress to their baby, it is unfortunately inevitable. However, there are a few instant ways to offer relief to your teething baby, including:

Other Common Causes Why Your Baby Has Red Cheeks

If your baby is not teething, you may be still wondering why are my babies cheeks red? Though teething is the most common reason for inflamed cheeks in a baby, there are several other reasons why a rosy cheeks baby is experiencing some discomfort.

Could Your Baby Be Suffering from Possible Sunburn?

Though exposing your baby to prolonged periods of the sun at such an early age is not recommended, there may be the odd occasion whereby your baby does experience a little sunburn.

If the sunburn is on their face, you’ll notice their cheeks look red, and they feel warm to the touch. You may also see them showing some signs of distress a couple of hours after catching the sun as the sunburn starts to itch and irritate their delicate skin.

If your baby’s red cheeks are due to sunburn, you can help them by:

Could Your Baby Be Suffering from Frostnip?

Though at the opposite end of the spectrum to sunburn, babies can experience frostnip when the weather is particularly cold. As a baby’s face is susceptible to cold spells, frostnip can occur quite quickly.

It’s easy to cover a baby’s head, ears and hands when out and about, but not so easy to cover their face, for obvious reasons! Added to this is the fact that babies will lose their body heat much quicker than adults. Therefore, occasional bouts of frostnip are usually inevitable if you take your baby out in the colder weather.

To soothe your baby’s frost nipped cheeks, you can:

Could Your Baby Be Suffering from Fifth Disease?

A less known cause of red cheeks in babies is a viral infection which is known as fifth disease.

Though not as common in babies, it’s still possible for them to contract this infection, which is said to be passed on from those infected by saliva or mucus. The exact causes are not entirely clear but what is known is that one of the visible symptoms of fifth disease is an inflammation of the cheeks.

Once fifth disease begins to work its way out of your baby’s body, this rash on the cheeks will become more evident, almost sunburn like in appearance.

Though it’s considered a mild type of infection, once your baby is diagnosed with fifth disease, you can treat it by:

Could Your Baby Be Suffering from Slapped Cheek Syndrome?

Finally, though it may sound awful, slapped cheek syndrome is perhaps more common in babies than you may think! This is especially true if they are around other babies and children and are more prone to catching this most common of viral infections.

If your baby has been unwell for a few days, with a high temperature and a runny nose, with a deep rash developing on their cheeks, they could be suffering from slapped cheek syndrome.

So-called because of its resemblance to that of a slapped cheek, this virus is usually transmitted through sneezing. Though it’s not a huge cause for concern, it can be an uncomfortable time for the child and worrying for a parent to see this appear on their little one’s cheeks.

However, if your baby has been confirmed as having slapped cheek syndrome, you can help them through it by:

More than likely, most redness in a baby’s cheeks will have a reasonable explanation that will allow you to treat it accordingly.

Though it’s not always nice to spot in a baby so young, most red cheeks can be dealt with adequately in a short space of time, meaning you don’t need to worry too much.

However, if you find that these symptoms persist for longer than a couple of days, you may want to ask for some professional advice from your doctor or local health visitor, who can offer you some additional reassurance.

Best Baby Carrier for Plus Size