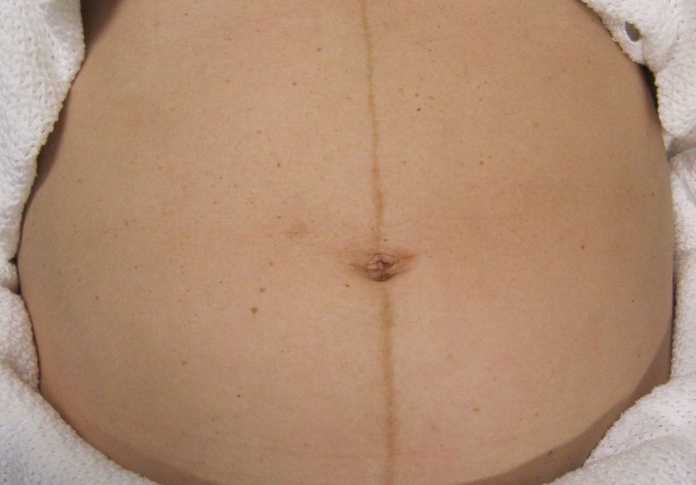 What is the linea nigra? Why does it appear? How can you prevent it from worsening? The linea nigra is the vertical dark line that can be found extending from the navel to the pubic area, which commonly becomes more visible during pregnancy.

For this reason, it is often referred to as the “pregnancy line”. Prior to pregnancy, it is termed the linea alba or “white line” and only becomes dark as a result of pregnancy.

You probably haven’t noticed the white line, since it’s so close to natural skin pigmentation, but believe it not it’s always been present. The darkening of the line, termed by experts as hyperpigmentation, which occurs during pregnancy is perfectly natural and absolutely nothing to be concerned about.

The linea nigra usually presents itself around the 2nd trimester of pregnancy and it’s not unusual for it to continue to darken as your pregnancy progresses. On average the line is around half an inch and runs down the center of your abdomen from belly button to the pubic region.

It remains a concern for some pregnant women but as you’ll learn in this article, just like stretch marks, the Linea Nigra is more of a cosmetic issue than a physical one.

Why Does the Linea Nigra Appear?

Even though the cause of the linea nigra remains undiscovered, it is assumed to be associated with changes in hormones that occur during pregnancy. A popular theory is that the melanocyte-stimulating hormone, secreted by the placenta results in hyperpigmentation of the previously “white line”.

In fact, this is assumed to be one of the main causes of all types of skin hyperpigmentation during pregnancy, including those changes that commonly occur on the face, arms and legs.

The melanocyte-stimulating hormone is responsible for modulating skin pigmentation. Throughout pregnancy, the levels of this particular hormone continue to increase, which can potentially result in discoloration of the skin on any part of the body.

What’s interesting is that the linea alba is in a region closest to the source of the hormones (the uterus and umbilical cord), which is thought to be the reason this area darkens faster than other parts of your skin.

As well as the linea alba, it’s very common for other areas of the skin to experience changes in pigmentation.

The Mask of Pregnancy

For instance, the Choasma or “mask of pregnancy” is a common occurrence during pregnancy in which the face gradually becomes darker and darker as the pregnancy commences. It’s also common for the areola area of the nipples to darken, which is assumed to be another consequence of the hormone changes.

Maybe of interest to some mother-to-be out there is the tale of the linea nigra providing an indication of your baby’s gender. Traditionally, it was assumed that if the line ran right from your navel to your pubic region the baby was a girl. Alternatively, if it ran past the naval, upwards, the baby was thought to be a boy.

Of course, this is by no means a reliable way to determine your baby’s gender, but it’s still it gives the annoying line some entertainment value at least. It’s a way to use your linea nigra to cheer yourself up and lift your mood, which certainly can’t be a bad thing.

Remember though, the presence of the linea nigra is a perfectly normal part of pregnancy and there is absolutely no reason to be concerned about its presence. You never know, you might even miss it after your pregnancy is over? Or perhaps not

How Can You Prevent it From Appearing?

Although it’s essential to remember that there is no way to avoid hyperpigmentation of the linea nigra, there are some things you can do to help prevent the line from darkening further.

A major step to prevent further darkening of the pregnancy linea niagra is to avoid and limit your skin’s exposure to direct sunlight as the cells responsible for pigmentation called the melanocytes to respond to UV-light. Therefore, by avoiding exposure to the sun, you can have some control over how much hyperpigmentation will ultimately occur.

The hormone responsible is the same one involved in giving you a tan. Therefore, if you want to avoid the line darkening more, try to keep your skin covered as much as possible and apply sunscreen at regular intervals. By limiting your exposure to UV, you can be sure that your pigmentation won’t darken anymore as a result of the sun.

Folate acid is also involved in pigmentation and by ensuring your diet has a healthy amount of folate you can help the overall appearance of your skin. A high concentration of folic acid has been demonstrated to keep your skin-pigment constant.

Low levels of folic acid, also called folic acid deficiency have been demonstrated to make hyperpigmentation worse in some examples. For example, in individuals with folate deficiency they commonly experience skin pigment loss, which can result in a pale and past complexion.

The best way to ensure you are getting enough folate is to eat lots of green leafy vegetables, fruits, and whole grains. To be on the safe side you can also take prenatal vitamins.

Ultimately, however, it’s important to remember that there is no way to prevent the linea nigra from appearing. However, be assured that it soon fades and goes away soon after pregnancy. For others, it takes a while longer, but either way, it is probably no cause for concern.

Occasionally, the pregnancy line doesn’t go away immediately after birth and can take up to 6 months to fade completely. However, don’t let it worry you, instead focus on the positives – this mark is a mark of motherhood. Think of it as a wonderful marking to a new stage in your life.

Why Should You Love Your Linea Nigra?

The linea nigra is a mark of a new and accomplished mother. Welcoming a new child into the world is one, if not, the biggest accomplishment you could dream of. Just remember that in the majority of cases, the line will fade, either partially or completely.

If the line doesn’t fade back to normal, then there’s no reason to beat yourself up about it. Instead, see the positive side of it. This line is a mark of that you brought someone extremely special into this world. If you are concerned about the worsening of the line, take preventative measures to keep the line from getting worse.

If you are really struggling to deal with your linea nigra, or perhaps even excited to exhibit it and share your opinions with others in the same boat, there are plenty of discussion forums regarding the linea nigra that you can contribute to.

The bottom line is that the linea nigra is a perfectly normal part of pregnancy. Many women experience it and continue to live with it. Maybe you will have no other option but to embrace it and so you should this line is a sign of motherhood and that is surely something to be proud of. 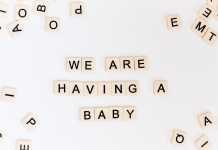 21 Ways to Announce a Pregnancy to Your Family in Person 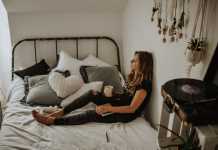 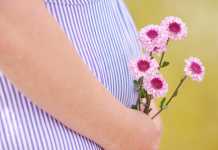 Cervical Mucus During Pregnancy: What Does it Mean?