What role does the Chinese conception chart play? Being able to predict the future is something that expecting mothers have probably thought about on more than one occasion.

Upon taking a pregnancy test to confirm that you are expecting, one of your first thoughts is probably: what gender the child you are carrying may be.

Sure, it is possible to reveal the gender of your little one up to 3 months after you get pregnant, but what if you could find out much sooner? There is a conception chart that is used by the Chinese that is thought to be able to do just this.

It is known as the Chinese conception chart, and it claims to be able to predict gender, even if you are not pregnant yet!

Chinese Conception Gender Chart: What is it? & How Does It Work?

The History of the Chinese Conception Chart

Supposedly, this gender prediction chart has been a staple item in ancient Chinese history. It is said that the chart is based on the five elements, yin, and yang, as well as the eight trigrams.

Dating back over 300 years to the Qing Dynasty, this chart was utilized in order to predict the birth of sons. This was important because boys were the favored gender at that time. It was thought that boys would grow to become providers for their families and carry on the family lineage.

Another reported finding of the Chinese conception chart was in an ancient royal tomb. While it is unclear exactly where the chart was first discovered, it was widely utilized in ancient history.

Is the Conception Chart Accurate?

With any type of prediction chart, accuracy will be questioned. Just how accurate can it be? Most people say that this chart is way beyond a 50/50 chance of accuracy, some even claim that it has been up to 90% accurate in predicting their own child’s gender.

On the research side of things, the findings were a little bit different. Studies and tests reported that the accuracy could vary between 5%-55%.

Some could compare this to the equivalent of a coin toss. At the end of the day, curiosity will probably get the best of you, and it is likely that you will want to try it out for your own pregnancy.

How Does the Conception Chart Work?

A simple internet search will direct you to many different conception charts. You can either input your details on a website and the result will be generated for you, or simply view an image of it like the one below and do it on your own. 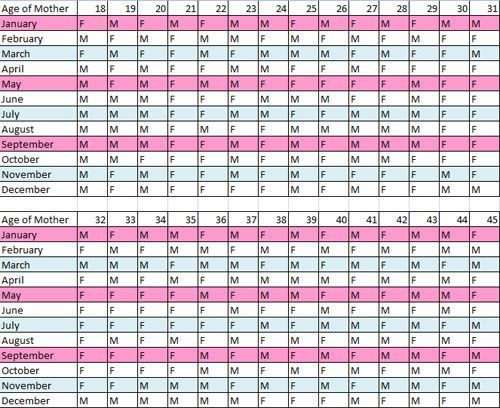 The information needed is the month of conception and your lunar age at conception. Find where the two intersect to find your prediction! For example, if you are 22 years of age and conceived in the month of January, according to the chart your baby’s gender is female.

This color-coded chart will display a prediction for virtually any month and any age that you record. By taking a look at the entire chart, you will be able to see the full expected results. So if you are trying for a girl, you will know the best age and month to conceive.

As expected, you should probably take your results with a grain of salt. The only accurate way to determine the gender of your future offspring is by having an ultrasound scan.

Regardless, the Chinese conception chart could be a fun tool to utilize. When planning for a little girl, the chart will be able to tell you exactly when you must conceive to result in your perfect mini-me.  If you already have children, you can also take a look at the accuracy by consulting the chart. This can give parents some unexpected peace of mind about the future.

While the chart itself seems straightforward, be aware that there are different versions of it that can be found online. Since its resurface in popularity, it has been scooped up and posted on various different websites. Stay at home mom and blogger, Kristen believes that she has found the most accurate version of the chart.

During the time of her writing the article, she was 10 weeks pregnant. According to the chart, she was set to have a baby girl, and that turned out to be true for her. She cross-referenced this with additional gender prediction methods, both of which pointed to her having a girl.

Kristen points out that knowing your lunar age is important. The authentic Chinese conception chart is supposedly based off of our lunar age versus our regular age. According to their calendar, we are actually a year older than we appear on a Western calendar!

This could make a huge difference in the results. There are several websites online that allow you to find out your true lunar age. So before you use the chart, make sure you have all of the correct information.

The months are different on a Chinese calendar. They base their months on a 29 ½ day cycle (following the moon phases). Given the math, a traditional Chinese year is actually 11 days shorter than our Western year.

They make up the time difference with months in between known as leap months, similar to our one leap day in February that occurs every 4 years.

Another tip is to try to conceive in between the time period of your desired gender of choice. For example, if you are trying for a daughter and your options are between the 2nd-10th lunar months, go for conception on the 6th lunar month.

While this still does not guarantee the accuracy, it is thought to provide a better chance of ending up with the gender of your choosing.

At the end of the day, using this chart is harmless, so go ahead and try it out for yourself if you are feeling curious!