Instead of artificial medication, there are mothers that seek out organic herbal remedies for milk supply when theirs is running low. Herbs, plants, poultices, and potions are used in almost every culture for this exact reason, some being more effective than others.

Using fenugreek for milk production is a common recommendation with a high reported success rate. But before you go ahead and take a dose, make sure you know all about how fenugreek seeds can affect you and how to safely use them; there are many potential benefits and, of course, as there is with all pharmaceuticals: some risks.

It’s a green, annual plant from Asia and South Europe that’s been cultivated worldwide over the past many centuries. It has numerous uses; namely in cooking, as different parts of the plant are frequently incorporated into dishes for flavor or its adhesive properties, particularly in the Mediterranean, the Indian subcontinent and the Middle East.

It can be used as an herb with its leaves or as a spice with its seeds usually to add a kick and an aromatic flavor to curries thanks to the chemical sotolon which the plant contains. Fenugreek can also be harvested and utilized as a microgreen to also be an ingredient in salads and pickles. A whole host of exotic and often ancient recipes contain Fenugreek in some form or another.

Not only has it been used in food but fenugreek has been reported to have many medicinal properties including antibacterial, hypocholesterolemic, gastric stimulant, antidiabetic and many more. Ancient Greek and Roman physicians highly regarded the herb and would mix it with water or make a poultice to be applied to sores, skin lesions and wounds. (1)

Additionally and most importantly, it’s also an ancient remedy for a mothers low milk production. It has been used as a galactagogue; a substance which has an ability to increase milk production and lactation in mammals. (2)

It has a very sweet odor, similar to that of maple and for this, it is used to imitate the smell and flavor in the manufacture of artificial maple syrup. This causes those that do often ingest fenugreek to sometimes smell like maple syrup when they sweat.

We would always recommend that a mother tries alternative methods of increasing lactation yields before using any medication at all, such as changing the duration of feed sessions, using a breast pump or changing the routine. But for some, this doesn’t always work and so an organic lactation aide such fenugreek is an attractive solution.

Fenugreek has either short term or long term applications depending on the timeframes in which it’s used. It can be used in a short period of time to supplement milk supply whilst long term ingestion can greatly increase milk production and the yields gained from pumping.

It has been shown to increase milk supply within 24 to 72 hours of taking an effective dosage of the herb which is fast acting. Some may see a chance in this time scale but others have taken weeks whilst others still see no effect at all.

Once the increase in milk supply has been achieved, the user can easily be discontinued with no lasting effects except a maintained increase in lactation. (3)

The ability of fenugreek to increase lactation is supported in a study by Sim, et al (4). The study tests dosing the subjects with varying amounts of fenugreek in various forms: teas, tablets, etc and sometimes alongside another galactagogic plant: blessed thistle.

It concludes that fenugreek is especially effective at increasing the perceived lactation of the subjects although considers the safety implications for using such a method since no conclusive study exists to reveal this.

It’s not completely confirmed the exact reason why fenugreek has this effect on breastfeeding women but it is proposed that the seeds contain chemical precursors to hormones which naturally increase lactation whilst others think that it’s linked loosely to another effect of fenugreek to increase sweat production since mammary glands are similar to sweat glands.

Fenugreek can be consumed in many different forms; capsules are most commonly purchased form retailers but so can the seeds or powder be purchased to make fenugreek tea.

The tea would, of course, be a less effective dose as it’s not completely known how much of the active ingredient has been infused and hence how much exactly you have taken.

The dosages stated are just common recommendations from fenugreek products but pay close attention to the dosage instructions of the product you choose. Most importantly you should always seek advice from an accredited medical expert such as your midwife, doctor, or pediatrician on what is right for you.

The beneficial effects that fenugreek is said to have on lactation is not completely proven by scientific study and there is no current consensus among the scientific community.

But there is a host of anecdotal evidence which would vouch for it. This is very important and should factor in to your decision on whether or not to try it as a lactation aid.

It is also very much worth noting that the plant does appear in one instance on the U.S federal drug and food administration’s poisonous plant database: see reference (5). And although there is little proof that fenugreek supplements could increase milk availability there are plenty of known side effects that are Worthing taking into consideration.

Fenugreek is in a family of plants called (Fabaceae) or in other words the legume, pea and bean family which is the same family as chickpeas and peanuts.

If you are allergic to any of those then you are at an increased risk on an allergic reaction to fenugreek too, so take extra caution!

The seeds are soluble in fiber which as a result slows down the absorption of carbohydrates into the bloodstream which actually improves symptoms associated with both type 1 and type 2 diabetes.

Again, you should always consult your physician about your medication if you are going to try fenugreek as these effects combined with your medication could cause hypoglycemia.

It has been said that asthma can be relieved by using fenugreek too among all its other cited health benefits but this is not the case. As with many particulates, it can actually make the symptoms of asthma much worse upon the inhalation of the powder.

However, if you take a look at the study by Emtiazy, et al (6), they have concluded that fenugreek can be used in the treatment of mild asthma when used correctly.

It’s also worth being aware if there would be any interactions between fenugreek and any other medications that you are taking or potentially could be taking in the future. When speaking to your doctor or health professional about any health issues you may have, give them the clearest picture you can about anything you are taking, including any supplements such as fenugreek.

As mentioned previously, any drugs used to treat diabetes and lower blood glucose concentration will have an interaction with fenugreek. Your diabetic drugs, including insulin, may need to be adjusted as a result of this.

There’s a potential for fenugreek to cause internal bleeding when combine with anticoagulants such a heparin and warfarin or platelet inhibitors. This is because fenugreek contains coumarin compounds which can interact with these types of drugs although there is no evidence of any such interaction.

Cyclophosphamide is a drug that is used to suppress the immune system during chemotherapy and the effects of it could be diminished by fenugreek. It’s much safer if you are taking this drug to avoid taking fenugreek as anything more than a food additive.

The use of fenugreek for increasingly low milk supply during pregnancy is not advised as it has in the past been used as an emmenagogue; a substance to induce labor. It’s still safe in all cases if it’s only used as a culinary herb (in very low doses).

There has been a study (7) reporting the possible foetal risks that fenugreek poses regarding defects in certain parts of the brain and nervous system. Anencephaly, spinal bifida, and hydrocephaly are all reported in the 2013 study by Khalki, et al.

Overall there are many reasons and studies that really suggest that taking this herb for medical usage during pregnancy is really not a good idea as just the risk in itself is not worth it.

Known Fenugreek Side Effects on Mother

Known Fenugreek Side Effects on Infant

If Fenugreek Side Effects Occur:

If you are experiencing any side effects or if anything unexpected does occur whilst taking fenugreek as a supplement you should discontinue use immediately. Additionally, see your doctor so that you can receive medical attention and advice.

Normally when symptoms such as loose stools or the maple syrup smell does occur they pass within a few days. Symptoms also do normally pass after the discontinued use of the herb (3).

Fenugreek is marketed and sold as a supplement which increases milk supply and lactation and is used by many individual right to the point of weaning, but not as a medication to treat any illnesses, diseases or health conditions. The known side effects of taking fenugreek as a supplement are not huge risks but there is little evidence apart of anecdotes to show that it would be effective.

The risks associated with taking the herb in medicinal doses during pregnancy, however, do not have considerable scientific backing but are indicated and so it sure isn’t worth taking that risk at all if you are pregnant.

Whether or not you want to try using fenugreek at all to aid lactation is completely up to you given that you have done all the research you can and know the risks but as has been said multiple times throughout this article, the advice of a medical consultant should be your number one source.

Fenugreek is one of the oldest plants to have been cultivated which was grown as a staple source of food in the past as well as a medicine and to produce dyes. Romans even used it to flavor their wine.

It can grow up to two feet (60cm) tall with round stems covered in fine hairs. The leaves are trifoliate and the flowers bloom during the summer with white petals tinged with violet.

The plant’s name derives from the Latin name for it faenum Graecum which means “Greek Hay”. Other common names include bird’s foot, Greek clover, and methi. Its scientific name is Trigonella foenum-graecum.

For those of you who enjoy cooking you may be interested in some of the dishes, this versatile plant is used to make as many countries and cultures employ its aromatic flavor in a variety of interesting ways.

The seeds are crushed and into a paste called çemen in Turkey which is then used to make pastirma with the addition of cumin, pepper, and other spices.

In Egypt, the seeds were added to pitta bread alongside maize which made a type of flatbread called aish merahrah which was a staple part of the diet for peasants in the countryside of Upper Egypt.

Eshkeneh and ghormeh sabzi are both Iranian dishes of which the leaves of fenugreek are a critical ingredient. The dishes were originally conceived in Persia and are often though of as Iranian national dishes.

Disclaimer: MomBible has provided this material for your information. It is not intended to substitute for the medical expertise and advice of your primary health care provider. We encourage you to discuss any decisions about treatment or care with your health care provider. The mention of any product, service, or therapy is not an endorsement by MomBible. 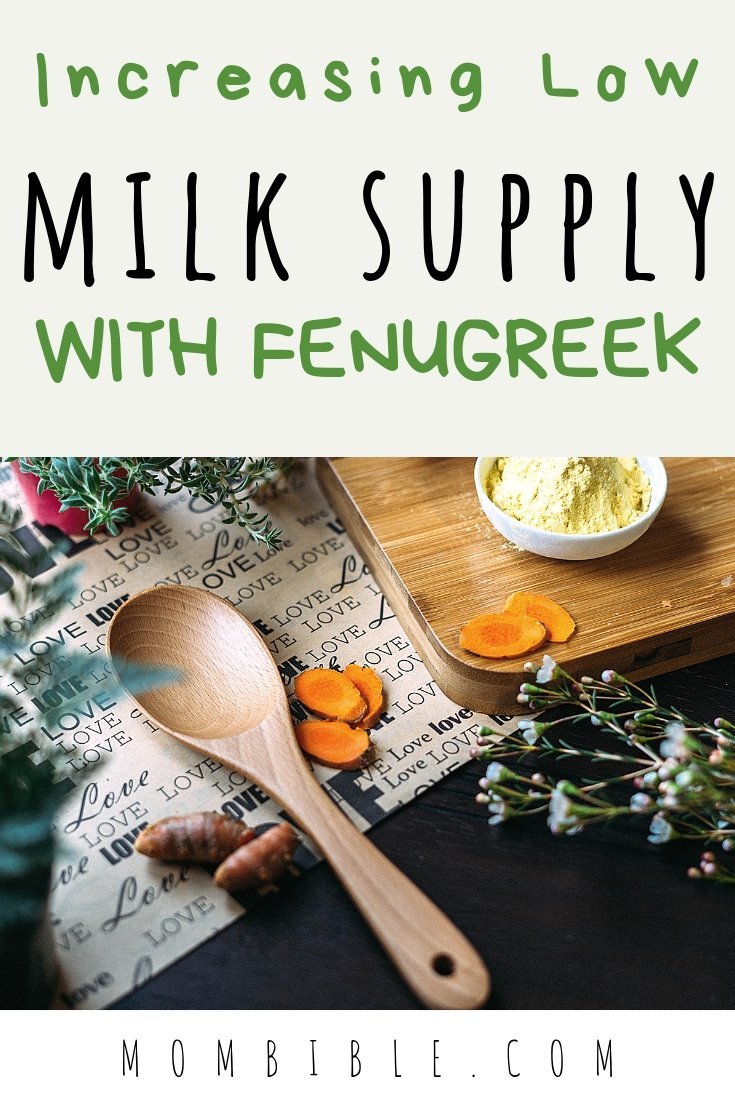