Impact of Fighting in Front of the Kids during a Divorce

Every relationship can have its rocky patches but sometimes these rocky patches last a lot longer than they should. It usually comes from a place of stress, frustration and even low self-esteem and can cause rifts in an otherwise stable family unit.

Stress can build up on a daily basis. It usually originates from issues relating to money, work, parenting, problems in the family or the relationship itself. When the stress amounts to tangible frustration, couples feel like they’re not on the same page and they may even fight.

Getting aggressive, shouting, screaming, throwing objects, threats and even physical violence are not ways that adults in a relationship should treat each other. And it’s even worse when they do it in front of their children.

Fighting in front of the kids sends the young ones the wrong message about how they should behave. Seeing their parents treat each other in such a way, as studies have shown, can cause emotional harm and behavioral problems.

Impact of Fighting in Front of the Kids during a Divorce

When we talk about fighting in front of the little ones, we are referring to certain behaviors (such as those mentioned above) exhibited by the parents that can make a lasting emotional impression on their child.

The dynamics between two individuals in a relationship can vary wildly compared when to other couples. People have different motivations, past experiences, temperaments and states that their relationship is in. People react differently to different scenarios and situations but with that being said…

Let’s’ have a look at the behaviors displayed by arguing parents in a little more detail and talk generally about what motivates couples to behave in this way.

The raising of the voice and yelling or screaming is usually the point at which a dispute is getting out of hand. In some couples, the raised voice quarrel can happen suddenly when one individual has provoked another, whether it was intentional or not.

Usually, the voice becomes louder because the individual does not believe the other is listening or talking in their point of view. But by some, it is completely unprovoked, unwarranted or unexpected.

It often happens that once one parent begins to shout, the other uses that as an excuse to shout back, this is when fights between couples become much more heated.

The noise level and mannerisms of their parents quarreling is shocking for children to experience and this is where their stress levels will start to elevate.

But what does raising the voice actually achieve? Does it make the other person more open to listening to your point of view or does it just provoke them to shout back, creating an aggressive, unsafe atmosphere and leading to much more violent displays.

Some couples or individuals within a couple may resort to breaking or throwing objects at the other. This is a highly destructive and an irrational means to express yourself and will in no doubt send the wrong message to the kids.

Not only will it cause a reaction of fear, anxiety, and insecurity for their safety, you are teaching them that property should not be cared for or valued. Furthermore, if objects are being thrown at a partner, this is an act of violence that children should not ever have to witness their parents exhibit.

People often react this way in a highly stressful situation in which they feel they are not being listened to or they have such resentment for their significant other that they intend to use the thrown object as an attempt at intimidation.

There are a plethora of different threats that can be made during a fight between a couple. Threats of walking out of the relationship are particularly hard on the kid as they will easily interpret that as a case of the parent not loving them anymore and could leave them at the drop of a hat. It’s very similar to a child coping with divorce may have.

Threats of violence are much worse, it can damage your kids sense of security and trust in the parent making the threats and also make them feel as if they are in a threatening household in which they are in danger. This can greatly hurt their self-esteem and psychological health.

Threats are usually made with no second thought and often times, people who make these kinds of threats wish they could take them back. They are made in the heat of the moment under high-pressure situations usually during a fight which has already escalated to yelling.

This is why it’s a good idea to avoid an escalated argument altogether and to remain composed at all times so that you don’t do or say anything that you might regret and that might make a negative impression on your child.

Physical violence within a relationship can occur on both sides and often have devastating results for the whole family. It’s not something to be taken lightly and it’s certainly not something that should be practiced at all, let alone in front of the kids.

If you are stuck in a relationship of physical violence, please seek help by contacting your local police department and by communicating with a relevant charity, such as the National Domestic Violence Hotline for further advice on what you can do to escape this situation for the sake of yourself and your kids.

While it seems the right way to go about dealing with the disputes you may have with your partner, capitulating also sends the wrong message to the child as they can pick up on your pretense.

They can tell if there is an underlying unresolved issue through your body language even if you are pretending that everything is fine. Kids know when there is a parental conflict and may be scared but capitulating and pretending will leave them confused and upset because they can tell that something is wrong. 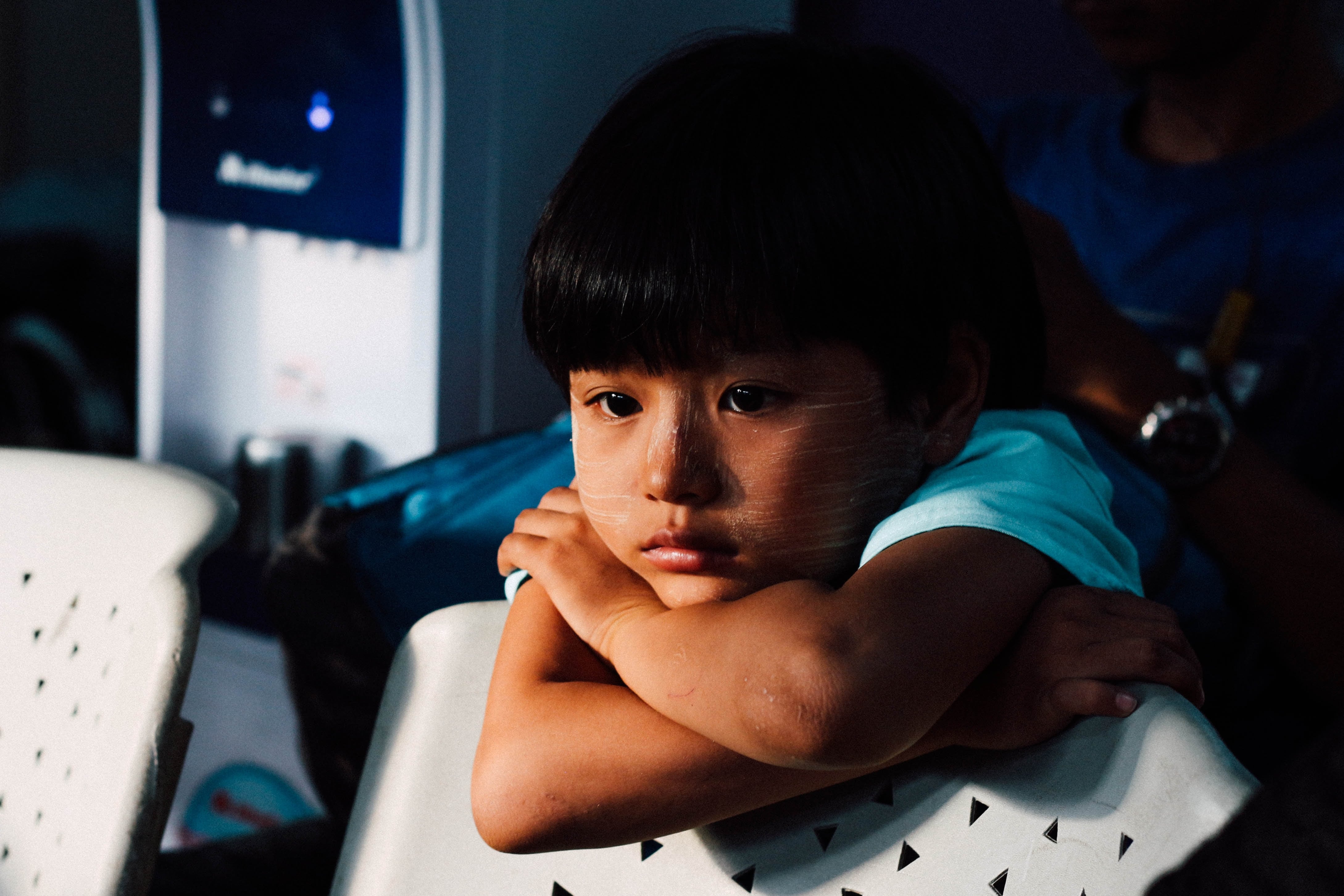 What Effect Does Fighting In Front Of Kids Have?

Historically it was always thought that as long as the child saw a peaceful resolution to the parental conflict, they would not endure any lasting negative effects but assuming that witnessing the parents fighting would have no impression on the child is quite harmful.

Various studies have now come to implicate that fighting in front of kids does indeed have a lasting impact. After all, when a child thinks of security and safety, they should be thinking of their parents who looks after and protects them as they grow into an adult.

Increased Stress Hormone in the Blood

Witnessing a parental conflict actually spurs on feelings of fear, anxiety, and stress. This has been shown in a study by Flinn and England who tested the stress hormone (cortisol) present in children’s blood on the coast of the Dominican Republic. Children who experienced more parental conflict show a higher average blood concentration of cortisol than those who do not share those experiences.

This is some proof that witnessing parental conflict elicits a physiological response reflected by the release of the hormone. Cortisol is strongly associated with the “fight or flight” response, regulated blood pressure and gives your body extra energy for handling stress among other functions.

It causes feelings of anxiety which can linger for hours after the experience and also has control over the sleeping cycle of a person. The heightened cortisol levels, therefore, interrupt the child’s sleeping pattern and they can find it hard to sleep after witnessing the dispute.

When they see their parents acting in such a way, it sends the wrong message to the child as to what correct behavior looks like when they associate their parent’s behavior with how an adult acts.

Insecurity and Low Self Esteem

The ability for a child to adapt to the social norms of society relied quite heavily on their self-esteem. This is their sense of self-worth or their appreciation of them self and confidence in their abilities in different situations.

Fighting in front of kids can make them feel vulnerable and it damages their self-esteem which, as mentioned, could potentially harm their progress at school and their social capabilities. According to Hosogi, et al, it can also increase the likelihood of the child developing psychological problems which go on to hinder their recovery from self-esteem issues. (1)

One way to reduce the damage done by a parental conflict that’s often expressed by fighting in front of the children is to put those aggressive or overly passive behaviors in the past. It’s completely normal for couples to have disagreements with each other and get frustrated by each other, but what matters most is how you both handle the situation.

It can actually be beneficial for the child to see how an adult should behave. That is, to resolve conflict in a measured and reasonable way with their partner, this way you are projecting to your children that respect and dignity are much more beneficial ways to interact with others who you might have a disagreement with.

For some, their family relationships are already past a point where it may seem impossible to return from. For them, online parenting classes can do wonders despite your possible skepticism.

Classes such as Positive Parenting Solutions aim to resolve conflicts and arguments between members of the family and to rebuild bridges with a relationship of trust and mutual respect. Families found that they could move on from their petty disputes into a future where each family member is a valuable support for each other like a family should be.

There are also some tips that you can put to use right now to help to avoid conflict in the household while sending your child the right message:

Tips to Avoid Fighting In Front of Kids

Be Understanding and Empathetic: You may be angry at something your partner has done. Whether or not it is something major or minor, it’s best to try and see what drove them to do it and understand the reasons. Start out with “I understand the way you feel the way you do….” or “I know your situation must be difficult…..”

Don’t Jump to Conclusions or Conflict: Try not to assume that your partner has done something deliberately just to get at you, as many individuals fall into the trap of believing. They may have done something with the best intention, or just didn’t think of the implications. Don’t jump in and accuse them of something as this can escalate a situation fast!

Avoid Blame: Balme is an accusation. Blame is rubbing someone’s mistake in their face. By laying blame on someone, you are provoking them to want to defend and justify to themselves that they have done no wrong instead of coming to terms with it in their own time. It’s also not constructive!

Avoid Harmful Expressions of Emotions: You may feel disappointed, frustrated, angry, stressed or saddened and it’s important that you express your emotions and don’t bottle them up, but there’s a right way and a wrong way. Try to express yourself with words rather than actions and try to keep yourself composed. But by all means, if you need to cry, then cry!

Work as a Team: Because that’s what a couple is – a team that works together, especially parents! You are together because you love each other and you should remind each other that every day. You have chosen your life together and had kids together so surely you can work as a team to get through the worst life has to offer, in a rational and resolute way.